As the season of Christmas arrives, a sense of joy and happiness starts to spread among the families. Everyone sets to prepare for some amazing get-together and house parties to bring in the family together under a single roof and enjoy the spirit of the season. Along with some delicious delicacies, it feels great to be accompanied by some fun and loving melodies of the Christmas songs. They bring about enthusiasm within the kids and lifts the spirit of Christmas even more. The kids love to have fun during this holiday season. What is better than playing some classic tunes of carols or some funny Christmas songs for kids that will lighten up their moods and make them happy.
Do you know that the Christmas carols were barred throughout England between 1647-1660 by Protestant Oliver Cromwell? Well, his idea was the Christmas should be a sombre day rather than a festive one. However, Christmas carols again become popular from the Victorian Era of the nineteenth century.
In this article, we will cover the funniest Christmas songs for kids to increase their enthusiasm to the next level. 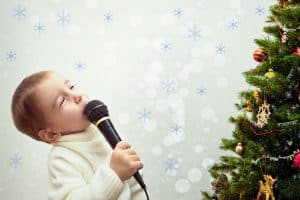 Here is a list of some of the best Christmas songs for kids this holiday season. You can undoubtedly think of adding these into your holiday jam.

This album was initially released in the year 1983 which features the artist Raffi. He is known for producing some excellent music, especially for kids. In this album, he has added some of the best Christmas songs for kids along with a collection of other tunes. These include”Old Toy Train” by Roger Miller, “Douglas Mountain” by Alec Wilder and Arnold Sundgaardalong with “Christmas Times A-coming” by Logan. In addition to these, there are several other originals that he has added to this wonderful album.

Being one of the funniest Christmas songs for kids, Ross and his Chipmunks have been successful in singing 20 classic Christmas songs that are filled with joy and humour.The kids also definitely find it funny and enjoy themselves throughout. This collection includes tunes such as “Deck the Halls”, “Silver Bells” along with the famous “The Chipmunk Song”.

This collection brings in the sense of nostalgia with its amazing classic tunes. These make you sing along and enjoy the beats. The songs included in this collection are “Rudolph the Red-Nosed Reindeer” (Burl Ives on Holly Jolly), “Frosty the Snowman” (Jimmy Durante on Holly Jolly) along with the most loved Christmas song “Jingle Bells” (A version by Bing Crosby and the Andrew sisters in this album). Along with these, you will also get some other famous Christian Christmas songs for kids that are the all-time favourite tracks of children.

4. “A Christmas Together Soundtrack”– John Denver and the Muppets

This series of soundtrack provides you with some of the most fun-loving tunes that make the kids joyful and delighted. They even move to the beats of these tunes. Originally, this soundtrack was brought into light in 1979 on some television show. This collection has amazingly well written Christmas songs for kids lyrics that are easy to learn for kids. Also, it includes tunes like “Have yourself a Merry Little Christmas”, “When the river meets the sea” and also “the Little Saint Nick”.

Incorporating one of the funniest Christmas songs for kids, this classic collection is similar to the Christmas Classics album. It has many overlapping songs such as “Rudolph the Red-Nosed Reindeer” (- Burl Ives on Holly Jolly), “Frosty the Snowman” (- Jimmy Durante on Holly Jolly) along with the most loved Christmas song “Jingle Bells”(by Ella Fitzgerald in this album). It also includes the famous track by Spike Jones, namely, “All I Want for Christmas” (Is my front two teeth).

This soundtrack being one of the funniest Christmas songs for kids has been a hit. It is due to its unique narration of a whole story written by Dr Seuss. This album also features some surprising tracks by Albert Hague along with the tunes such as “You’re a mean one Mr Grinch” by ThurlRavenscroft.

This amazing collection of some of the funniest Christmas songs for kids includes a series of 13 soundtracks sung by Tara McLean. The kids will love these tunes since they are composed using simple instruments like acoustic guitar and piano.

Popular since 1995, This song is an extension to Jeff’s comedy “You might be a redneck if”. Children love to hear it owing to its enticing lyrics and an excellent comedy routine. The song describes the narrators visit Walmart to purchase some gifts for Christmas.

Sung By: The Muppets
Being the top pick in the 1980s, Scrooge from the movie “The Muppet Christmas Carol” is an amazing song to enjoy while having your favourite snacks. The movie itself was a terrific hit, and this song is just the best song you will hear that night. Kids will enjoy its easy lyrics and excellent tune.

The songs as mentioned above, are some of the most beloved Christmas songs for kids. They could be played in the coming holiday season to bring about joy and happiness to the kids. Then, the kids would surely love to celebrate Christmas with such enthusiasm every year. Playing such Christmas songs has been a tradition that has been followed by many generations and is something that you should pass on to the next generation to follow.