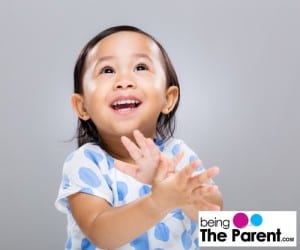 A fourteen month baby is, by no means, an infant any more. He/she can be called a child. Once your child is past the magical age of 12 months, things should be much easier for you as a parent. Now, your worries would not be about feeding your baby and finding a proper crib. Instead, you should be worried about him/her getting hurt by trying to climb up to higher places. During this stage of growth, your baby would need a bright and colourful nursery to play in. It should be equipped with toys that would help in the development of requisite skills. Children at this age are brimming with energy. This is a universal fact; one that transcends race or geographical barriers.

What most children can do

At fourteen months of age, most children would be able to recognize the people around him/her. He/she may indicate certain objects or activities by a combination of gestures and words. Communication skills would develop greatly once the child has passed fourteen months of age. The normal vocabulary of this age should be around thirty words. Around this age, some children may begin to enjoy the attention they receive. They may show skills such as walking on two feet in front of crowds. If your baby cries during this point of time, it is only because he/she has some difficulties or is probably hungry. As the vocabulary develops the child starts indicating what he wants and otherwise. This is also the time to set discipline and ensure that you and your spouse are on the same page on what is permissible and what isn’t.

Even for the late bloomers, this is a peak time for your child to attempt to walk- with or without support. Movements between the different postures should take place unhindered.

By now, the baby’s diet should have evolved to include cereals, pulses, vegetables as well as the occasional egg or meat. A child of this age would be able to digest almost anything. But care needs to be taken to ensure that the diet is given in controlled quantities. Over feeding may lead to indigestion and other complexities. Many a time, your child would gesture his/her preference for a certain kind of food stuff.

What some children can do

Many children would be able to respond to questions, in diverse ways. He/she may associate a syllable with an answer like ‘yes’ or ‘no’. A lot depends on the environment in which he/she in brought up. Children of fourteen months would love to be raised high up into the air. He/she may love having a playmate around; one who would be able to engage with him/her in a number of ways. Games such as peek-a-boo are loved by most children of this age.

What few children can do

It is common for children to feed themselves at this age. Still, very few would be able to use spoons to feed themselves. Although there would be spillage, this is a significant step because your child is learning how to use to grip. It is always to have someone by his/her side while your baby attempts to feed using a spoon.